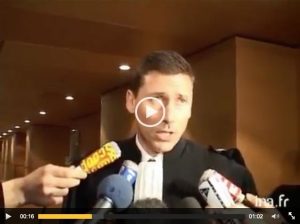 Master Christophe Cottet-Bretonnier, born on January 27, 1971 in Annemasse (Haute-Savoie), is a lawyer at the bars of Lyon , Paris and Thonon-Les-Bains.

He is known for his role in the Fauviau case, as well as for defending Toni Musulin, who was convicted in Lyon of the theft of 11.6 million euros. (video )

A criminal lawyer, labour and family lawyer, he resides in Lyon and Paris.

After starting his career in Montreal, Canada in 1999, he successively opened law firms in Lyon, Annemasse, Oyonnax and Paris.

A former second-round tennis player and organizer of exhibition tournaments, he now holds positions with the French tennis federation and the CNOSF.

Since 2020, he is the lawyer of the soprano Chloé Briot (music adward 2018) and former tennis champion Patrick Proisy (finalist to the French Open 1972).

In 2022, he defends the mother of the murderer responsible for « the Dovers massacre », author of five member family murder before being shot dead by the GIGN.

Christophe Cottet-Bretonnier is a Knight of the National Order of Merit.